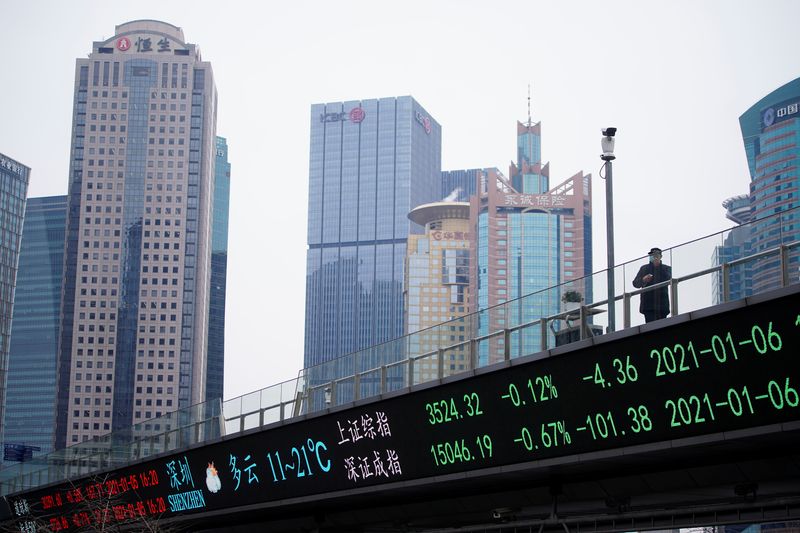 MILAN – Stock markets around the world slipped on Monday as fighting in Ukraine raged on with no sign of a ceasefire even as diplomatic efforts continued, while Brent crude prices climbed above $110 a barrel as supplies remained tight.

Turkey’s foreign minister said on Sunday that Russia and Ukraine were nearing agreement on “critical” issues and he was hopeful for a ceasefire if the two sides did not backtrack from progress achieved so far.

Most share markets rallied last week in anticipation of an eventual peace deal on Ukraine, but it could take actual progress to justify further gains.

“The coming days will be a litmus test on whether last week’s risk-on rally was overdone. Hopes related to a peaceful resolution in Ukraine have relied on headlines more than evidence,” said ING’s Francesco Pesole and Chris Turner.

“Should a ceasefire not be agreed in the coming days, markets may struggle to hold on to their sanguine approach to the conflict,” they added.

In Asia, where Japanese markets were shut for a public holiday, the MSCI’s broadest index of Asia-Pacific shares outside Japan fell 0.7% with investors awaiting further details of possible stimulus from Beijing.

BofA’s global fund manager survey last week had a bearish bias with cash levels the highest since April 2020 and global growth expectations the lowest since the financial crisis of 2008. Long oil and commodities were the most crowded trade, and vulnerable to a pullback.

The war in Ukraine, surging commodity prices, supply chain issues and policy tightening have all made investors less upbeat about the prospects for global earnings growth.

“The range of outcomes is now unusually wide so at the margin you should rein in the amount of risk you take,” said Truist Co-Chief Investment Officer Keith Lerner.

“In the last few years we have had huge upward revisions (on earnings) but this year there is less room for upward earnings surprises. We still think companies will beat estimates but to a lesser degree,” he added.

Investors were also waiting to see if Russia would meet more interest repayments this week. It must pay $615 million in coupons this month while on April 4 a $2 billion bond comes due.

Bond markets were braced for more hawkish language from the U.S. Federal Reserve with Chair Jerome Powell speaking on Monday, and at least half a dozen other members through the week.

Policymakers have flagged a string of rate rises ahead to take the funds rate to anywhere from 1.75% to 3.0% by the end of the year. The market implies a 50-50 chance of a half point hike in May and an even greater chance by June.

“In balancing the near-term upside risks to inflation with the downside risks to growth, central banks are sending a clear and strong signal that policy is on a path to normalise,” said JPMorgan (NYSE:JPM) Chief Economist Bruce Kasman.

“However, a sustained cut-off of Russian energy supply would push inflation substantially higher, magnifying an already severe squeeze on U.S. consumer purchasing power,” he warned, adding it would likely throw the Euro area into recession.

“Under this scenario, policy normalisation would come to a halt across the world.”

European Central Bank President Christine Lagarde said on Monday Europe’s efforts to fight climate change and reduce its reliance on fossil fuels will be inflationary in the short-to-medium-term but drive down prices in the long run.

The market looks aware of the risks to growth given the marked flattening of the Treasury yield curve of recent weeks. The spread between two- and 10-year yields has shrunk to just 21 basis points, the smallest since the start of the pandemic in early 2020.

Higher Treasury yields have helped lift the U.S. dollar on the yen, where the Bank of Japan remains committed to keeping yields near zero. The dollar was up near its highest since early 2016 at 119.19 yen, having climbed 1.6% last week.

The dollar had less luck elsewhere, in part because history shows the currency tends to decline once the Fed has begun a tightening campaign.

Joseph Capurso, head of international economics at CBA, noted flash manufacturing (PMI) surveys from Europe would be a hurdle for the euro this week.

“Europe is most exposed to lower supply from, and higher prices for, gas and agricultural imports from Russia and Ukraine,” he said. “A fall in the Eurozone PMI into contractionary territory could push EUR/USD back closer to its war low of $1.0806 again.”

In commodity markets, gold has failed to get much of a lift from safe-haven flows or inflation concerns, losing more than 3% last week. It was last up 0.2% at $1,924 an ounce. [GOL/]

Oil prices also lost ground last week, but were pushing higher on Monday as there was no easy replacement for Russian barrels in a tight market.

Brent rose 4% to $112.20, while U.S. crude rose 4.2% to $109.14 a barrel as European Union countries consider joining the United States in a Russian oil embargo, while a weekend attack on Saudi oil facilities caused jitters. [O/R]

Tech economy, rather than virus itself, remains biggest uncertainty in real estate market